Experience the best of both worlds at Riverwalk East, where the comfort of your home merges perfectly with the refreshing energy of a purely natural setting. With prices starting at $749,990 for 3-bedroom units, enjoy the ease of a traditional family home within the quaint town of Brantford. An ideal home awaits you – be one of the first to call this scenic setting home. Development is slated for completion spring 2024.

Below is a handy overview of the community's characteristics and downloadable resources.

Our homes at Riverwalk East are masterfully designed for optimal living space and functionality. With a soaring 3 stories, our homes are fully above ground, maximizing the use of natural light for a happier and more serene living environment. 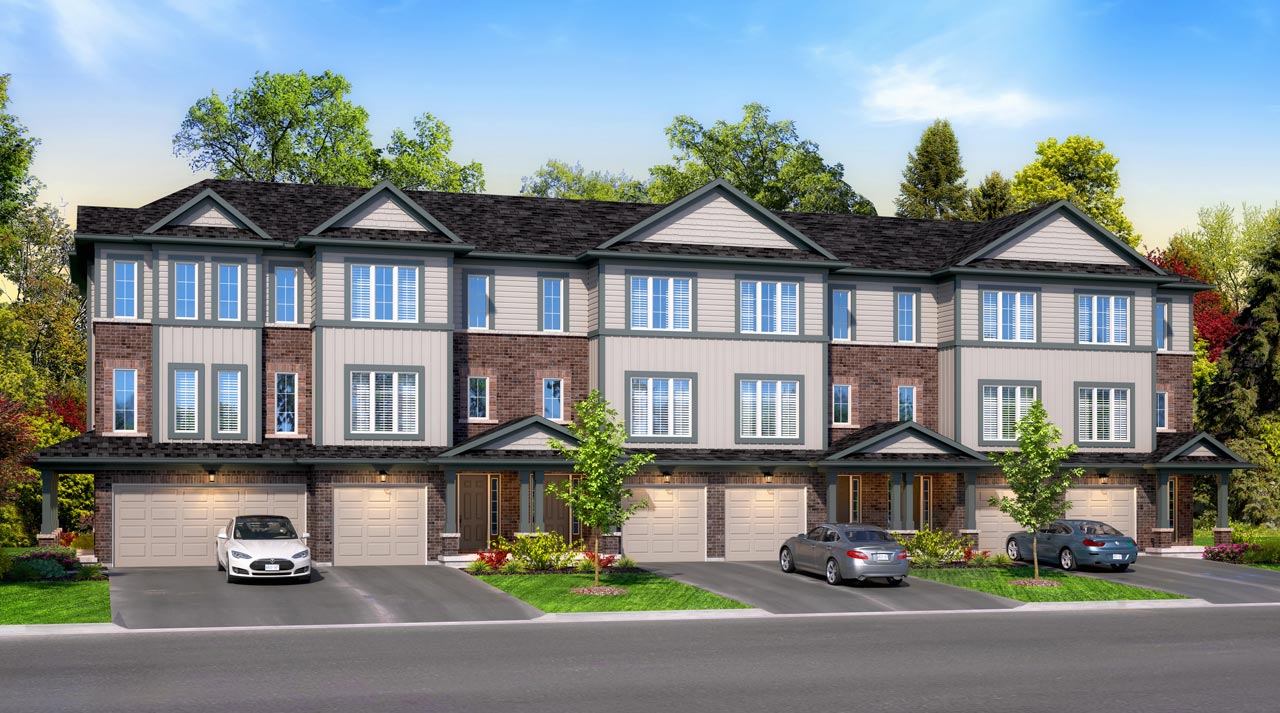 There’s so much more to this “Telephone City” that will satisfy your cravings of culture, adventure, shopping, and food.

Brantford is a beautiful city in Southwest Ontario that has small town charm despite being a major industrial centre. It is also known as the “Telephone City” thanks to former resident Alexander Graham Bell who invited the telephone at his father’s home, the Bell Homestead. The city is surrounded by picturesque parks and gardens with the Grand River running right through Brantford. It’s the birthplace of hockey legend Wayne Gretzky, the infamous late comedian Phil Hartman, and Group of Seven painter Lawren Harris.

Brantford is a town on the rise. Traditionally a manufacturing center, the city is successfully attracting new high-tech companies and green technology developments to build an economy for the future. The strong and growing local economy makes Brantford attractive for young families. With historic homes and landmarks along with a renovated town centre, Brantford is building a buzzing community.

Number of Homes in Brantford

Brantford is named after Joseph Brant, an important Mohawk chief during the American Revolutionary War and later, who led his people in their first decades in Upper Canada. However, Brantford's industrial history began when, in 1874, Alexander Graham Bell started his work on the telephone here in his hometown. He completed the work in Boston two years later, and Brantford became home to Canada's first telephone factory, earning it the title of "Telephone City." These developments ensured that Brantford would be a strong center of industry in Canada.

Brantford is a gpading centre for the knowledge economy in Ontario. Wilfrid Laurier University operates a Brantford campus in the heart of downtown with 2,800 full-time undergraduate and graduate students. There are also partnerships with Nipissing University and Conestoga College who operate programs through Laurier Brantford. There are several elementary and secondary school options in Brantford. The city and surrounding areas are served by the Grand Erie District School Board, the Brant Haldimand Norfolk Catholic District School Board, and Le Conseil Scolaire de District Catholique. It is also home to the W. Ross Macdonald School for blind and deafblind students; the alma mater of Canadian jazz-blues-rock vocalist and guitarist Jeff Healey.

Brantford's central location between Hamilton, Toronto, and London make it an ideal place to live. It is conveniently located by Hwy 403 and Hwy 24. Just outside city limits is the Brantford Municipal Airport which offers no landing, take-off, or short-term tie-down fees for recreational and general aviation. VIA Rail has daily passenger trains stopping at Brantford Station on the Quebec City-Windsor Corridor route. The city offers 3 taxi services along with Brantford Transit which operates 9 bus routes throughout the city. By 2020, GO Transit will be expanding to Brantford running daily rail services to Hamilton and Toronto.

Downtown Brantford is teeming with amazing places to shop. There are many specialty boutiques complemented with thrift stores where you can discover the perfect piece at a great deal. The Lynden Park Mall features many major retailers and high-end specialty stores. The renowned Wayne Gretzky Sports Centre features a swimming pool, a fitness center, and an arena for hockey and skating. Maybe catch a show at Sanderson Centre for the Performing Arts or play a round of golf at Northridge, a championship par 72 municipal course. Watch a Brantford Red Sox baseball game at Arnold Anderson Stadium or try your luck for charity at the OLG Casino Brantford. There’s no shortage of activities and amenities in this city. Best of all, Brantford is home to nearly 70 kilometers of natural trails that are perfect for running, cycling or hiking.

Get first in line for another exciting release of 18' freehold towns coming this summer to Riverwalk East.